What Happens When You Believe What You Are Told

The goal is to make you believe.

Where profits are concerned - be very careful.  The best you can hope for, if you`re still alive years later is monetary compensation, maybe an apology.  You will be fought as the article below states.

Anyone wanting to screw with food sources and nature on a grand scale in the quest for the almighty buck is going to try and convince you what they are planning is beneficial and you should be thankful.

You want to conduct an experiment here, had the opportunity to address the public, answer questions and concerns, sent letters to the editor, replied on blogs, and created a website.  You have provided a good snapshot of your proposal and your attitude and concerns for those where this grand scale experiment is to be conducted.

Discredit/belittle those who ask questions and make us believe they are to be trusted.  Their public spin:
The bottom line answer is that this project is an environmentally beneficial, well thought out, innovative aquaculture concept, with a scientific base that is absolutely in the public interest. Perhaps if we had more such businesses like this in the Comox Valley there would be less need for projects like Raven Coal.

The research and development of this new aquaculture industry concept has already started in the hatchery environment as well as at the Deep Bay shellfish research centre. The science will be done first before we embark to the commercial level. Support sea cucumber ranching.

A wonder drug, a wonder slug.  Humans should not be your guinea pigs.

What possible reason is there to believe what we are being told?  None.

There is no reason to believe in a large scale experiment.  It's an experiment.

Where did this ass backwards attitude come from that expects you to be thankful to those wishing to conduct grand scale experiments right where you live?


Why are experiments being touted with the same public relations strategies as products which have undergone these stages before the public is exposed?


"Grunenthal maintains that its actions were consistent with the state of scientific knowledge and the prevailing standards for pre-marketing and testing of the pharmaceutical industry in the 1950s," the company said in a statement after the settlement was announced to the Victorian Supreme Court.

"Grunenthal will continue to fully defend any litigation brought against it."

The drug company said it believed it acted responsibly in the development of thalidomide and "greatly regrets the consequences of the thalidomide tragedy". 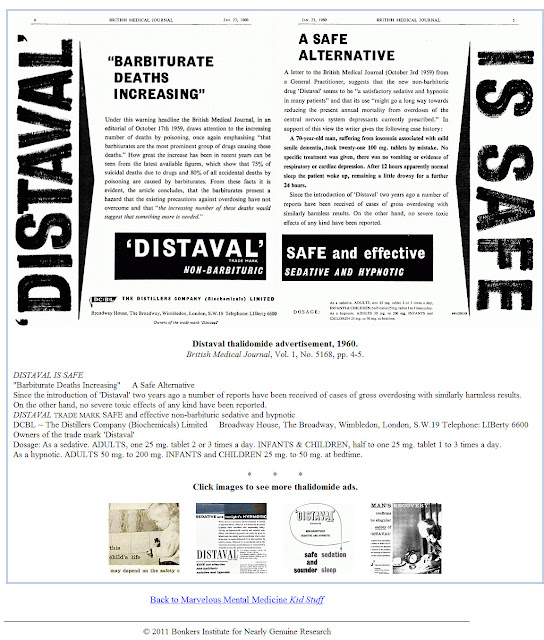