The following comment appeared in response to my posting "Kensington Island Properties Update" video on the cumberlander:  http://www.thecumberlander.ca/show2077a45s/Kensington_Island_Properties_Update

By Sonny Day
Yesterday · I understand you are no longer a Union Bay landowner. If that is true then why you are still so concerned about what KIP is doing in Union Bay.

Only those who's property values will be affected by this development and water treatment should be concerned. As a tenant if you don't like what is happening in Union Bay you can just up and move.

Comments by you at UBID Board meetings and in this media are simply your personal opinions and do not reflect "concerns" of the majority of actual landowners in Union Bay.


Is this goof for real?  This is a perfect example of the mentality encouraged here and it covers so many subjects.  Particularly bristly about my question at the meeting regarding Mr. McMahon being a 'ghost'.  Guess they prefer 'Saviour'.
More to come - where's spooky?  :)

The turd impersonating a human has surfaced again on The Cumberlander

This mental midget stated:   I just made a simple comment about why you are still so concerned about KIP in Union Bay when you no longer are a land owner there.
Funny, I would have said "land owner here", since that's where I live.  I don't think this piece of shit coward lives in Union Bay. 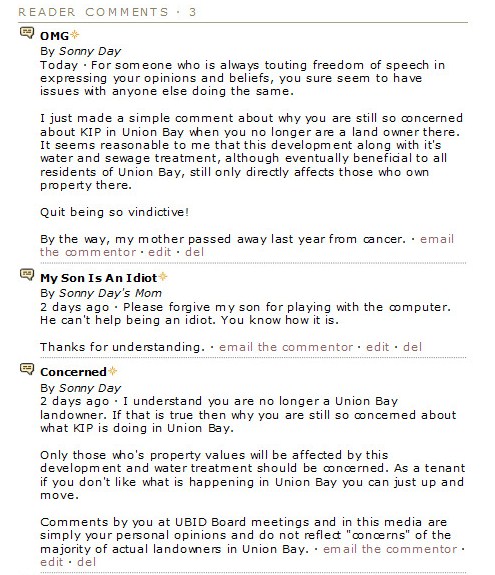 Sonny Day before and after sex change.
Mama passed on her good looks. 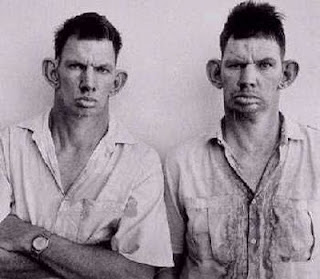 How's that for a start?  You can go and tell everyone what terrible things that heartless Mary Reynolds said about you and your dead mother.

Oh wait.  No you can't - you don't exist asshole. Fishing for imaginary sympathy get's you just that - the sky is the limit - how about throwing in a disease you could make up and of course it would be terminal.

Here's an insult to the 'Sonny Day' posting on the Cumberlander - I'm glad your mother is dead.  Maybe call your lawyer Sonny.

"Did you hear the awful things Mary Reynolds said about the imaginary person and their dead mother?"

You may as well have signed in as Zero.

UPDATE:  June 27, 2012
I compiled this information in January 2010, after the Dec. 2009 KIP hearings, when I criticized the fact anyone could support KIP in order to push this development through, when it should have been left up to the landowners.

Where was spineless Sonny Day and buddies when I brought up this issue?

Couldn't possibly be a real KIP supporter as KIP VP and his lawyer got 100 companies to support the project with an ad in the local papers.  Couldn't have been a member of the Fake Union Bay Residents' Association as they were getting support from outside Union Bay.

Sonny is too dumb to think of what took place before it decided to grow an imaginary spine.


Would you like me to forward your comments to Ruth McVeigh in Ottawa so she knows you want her to mind her own business?

How ridiculous and useless these public hearings are.

Yellow:  Realtor – non resident.
Green:  Businesses supporting KIP including those who have been hired by KIP.  Specifically Focus and McElhanney Consulting.
The information is available to the public at the Comox Valley Regional District.

Neutral:  one who does not side with any party in a war or dispute. Are these residents content with being labeled neutral?
Neutral submissions received at the hearing Dec. 7, 2009

Neutral Submissions Received prior to public hearing re: bylaws 56 and 57.

Submissions received and submitted by James Smith for consideration by the RD in regards to Bylaws 56 and 57 at the hearing in Union Bay Dec. 7/09. Submissions made through the web server "Kensington YES"


Submissions made at the public hearing - supportive

Submissions made prior to the public hearing - supportive