Complete video of UBID monthly meeting at:
Your Government in Action Representing YOU 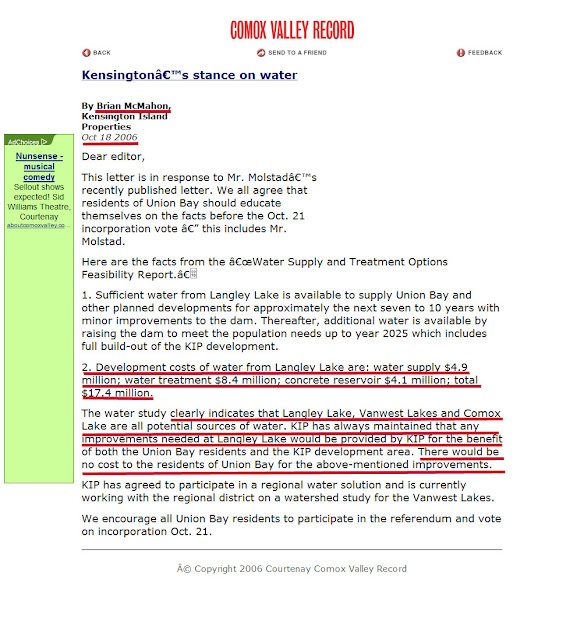 Come on sheeple.  I can't be the only one who kept track of what we were told.  This guy won't talk to me or answer my questions.  (That should tell you something).  Why doesn't anyone ask him about all the VERBAL promises he made?

Well, this exchange should clear up any confusion regarding sewer and water.

I replaced this clip as the audio was terrible.

The following 2 articles are from May 8, 2012, Comox Valley Echo and Comox Valley Record - highlighting added regarding subject.

By Philip Round, Comox Valley EchoMay 8, 2012
A major obstacle to a start on the giant Kensington Island Properties development at Union Bay has been removed.

After more than 13 years of seemingly endless process, a deal agreed Friday means the granting the first building permits is a lot closer.

There still needs to be B.C. Environment Ministry approval for a proposed wastewater treatment plant, but KIP vice-president Brian McMahon said talks on that were progressing well and he hoped for approval of the plans within about three months.

The new agreement on water licensing was "a great step forward," he said, and cleared a big hurdle that had prevented a start on building.

The initial development will include the construction and funding of a new water filtration and treatment plant that KIP had previously offered Union Bay, which will serve all existing properties as well as many new ones.

But McMahon cautioned that getting agreement on water supplies to the first phase of the development had to be coupled with wastewater treatment out; in practical terms, one could not work without the other.

The crucial document was signed in front of almost 40 Union Bay landowners Friday afternoon after being ratified unanimously by the UBID board. Earlier in the week, it had been approved by the regional district board.

Under it, UBID gets to keep control of the water licences and physical assets like Langley Lake, the treatment plant and pipelines, at least for now.

It has agreed to transfer the licences and some key supply assets (but not the dam, the lake and the land around it) to the regional district at some future date - but only when it considers the time is right, or sooner if the provincial government compels it to do so.

But, said UBID chair Carol Molstad, there is no precedent for the province to intervene in that way, so the outcome boiled down to UBID having the power in its hands to decide when it would be in the best interests of landowners to request a switch.

That might be, she suggested, when it looked like UBID was going to run out of water to service further new development, or was likely to face insurmountable costs in creating new capacity.

And while that wouldn't be soon, when the time was judged right the two authorities had agreed "to work cooperatively in a timely manner to effect the necessary requirements for a seamless transfer."

A series of conditions has also been agreed for any future transfer to protect the interests of landowners.

For the longer term, the regional district has said it needs to hold the licences, as the province wants it to adopt a coordinated regional water supply strategy for the Comox Valley.

But it has always said acquiring them was not a short-term need - but it sought assurance at some stage it would happen.

Molstad presented the agreement as a win-win for both authorities - but an even bigger one for the wider community, as there were no further local government-related issues to hold up building permits for Kensington.

And that meant KIP could also move forward on its offer to build and donate to the community a new water treatment plant at McLeod Road, serving existing properties as well as up to 250 new ones to be built in early phases of the wider KIP development.

A treatment plant with greater capacity would have to be provided later on land that UBID will need to buy for the purpose, but the water agreement now meant that at least the first 250 properties could be built to KIP's own timetable.

Molstad said there had been an unprecedented level of cooperation and dialogue between UBID and CVRD in negotiating the agreement, and she felt sure that would continue.

"Our board has worked hard to protect the interests of Union Bay stakeholders," she said, acknowledging the help of MLA Don McRae in securing the agreement. "Union Bay is ready to move forward. Now it is up to Kensington."

For the regional district, Area A rural director Bruce Jolliffe said he was "very, very happy that this has worked out."

It had been a rocky process at the start, but in the end an agreement had been reached that worked for both parties, and a mutual understanding had been reached on the issues and the way forward. "We worked collaboratively to resolve this, and we got there," he said.

And regional district board chair Edwin Grieve (Area C) added that better communication had been key to getting over the initial apprehension. A pillar of trust had been built that would be good for both authorities over the longer term.
pround@comoxvalleyecho.com

Kensington Island Properties took another step forward Friday when the regional district and Union Bay Improvement District (UBID) signed an agreement that will enable the company to proceed with constructing a water filtration system for the Island community.

The company still needs to reach an agreement with the Ministry of Environment for a wastewater treatment plant, which needs the Comox Valley Regional District's stamp of approval, as was the case with a water infrastructure agreement between KIP and the UBID.

The CVRD board signed a master development agreement in 2010. A clause calling for a transfer of the water licence to the regional district had been a sticking point for the UBID throughout discussions.

It also identifies two conditions under which a transfer of the district’s water supply assets could occur — if the UBID requests a transfer and the CVRD accepts, or the Province changes UBID's letters patent and requires a transfer. But Molstad said neither of these triggers will happen in the foreseeable future.

"We have been given every indication that the Province has no intention of forcing a transfer," she said in a statement. "UBID retains ownership of the land around and under the lake as well as the pipeline right of way, including after a potential transfer."

Before applying for a building permit or subdividing, the regional district says KIP needs to prove there is an adequate amount of water from Langley Lake to supply the land in question.


McMahon expects to reconvene soon with the ministry and consultants to discuss the wastewater treatment plant.

"The grass is growing and the paint is drying," he quipped, referring to the 13 years that have passed since KIP purchased 1,000-plus acres in Union Bay.


The company plans to build houses, a golf course, a marina walkway, and a series of parks and trails. McMahon said KIP has so far invested more than $12 million into the project.

The Philadelphia-based Hanse built Castle Stuart in Scotland, named course of the year by Golf Magazine in 2009. The publication also named him Golf Architect of the Year.

The Olympic planning committee has chosen Hanse to be the golf course architect for the 2016 Summer Games in Rio de Janeiro.

In addition, Donald Trump has asked Hanse to rebuild the course at the Doral Golf Resort in Florida.

"His stock price has gone up substantially since we got him," said Kensington Island Properties vice-president Brian McMahon. "He's going to be here hands on to build it."

We are so lucky to have open, honest and accountable representatives, each one believing 'they' can fix whatever has gone wrong.  Remember, these people have a vision for you - how good is their sight?

When are YOU going to stop being willfully ignorant?  Maybe you are just too stupid to realize what is going on.

Just my opinion, of course. :)