Just my opinion and questions/concerns

Should landowners worry about conflicts of interest or other actions taken by unelected individuals and elected officials involved in the agreements our Government has signed and is about to sign concerning Union Bay's water?

Is this Government covering up wrongdoing?  Is the Chair compromised due to the involvement the Developer claims knowledge of?  For someone who was "outraged", not a peep since.  Why is that?  Is there a major ego at work thinking only 'they' know what is best for the community?  Is there a chance the Chair being involved in this negotiation prior to being elected leaves the landowners at risk legally or liable?

The Water Infrastructure Agreement came back to the Board with the lease term for the existing reservoir changed from 5 years to 1 year.  The Administrator advised me on Aprill 11, 2012, the term has now been changed back.  The Chair has advised it is a signed legal document they are forced to abide by.  Then how did they change it back?

Why are we accepting this ridiculous giveaway negotiated by someone who obviously didn't have a grasp of what they were doing.   This developer came in and played us all for suckers.  Where's the win win?

We're not getting the very thing that caused the community to support this development - Sewer.

NO SEWER IN UNION BAY 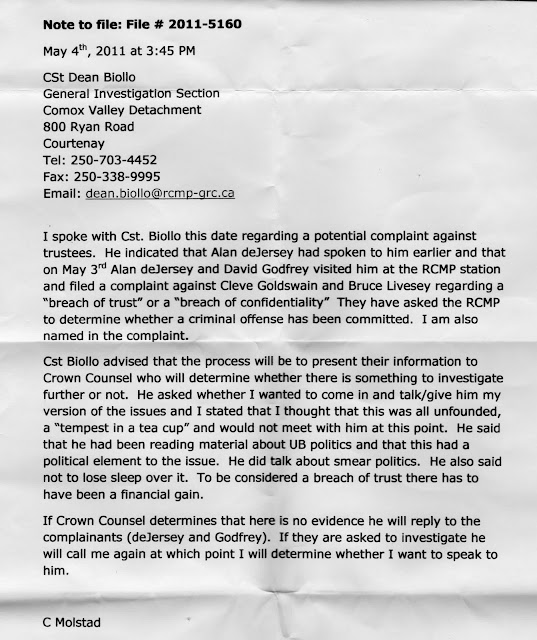 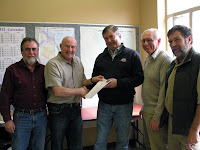 The gift comes in the form of a Water Treatment Infrastructure Agreement, which the Union Bay Improvement District and KIP ratified last week.

The UBID says the agreement will provide mandated water treatment at no cost to landowners, and will solve surface water challenges around turbidity

The agreement also represents a step forward for the developer, which had hoped to have the water issue resolved a long time ago, KIP vice-president Brian McMahon said at a Monday news conference.

"We're getting close," McMahon said, mindful of the limited window in a building season. "We have a lot of pipe to lay."

The company has planned to build houses, a golf course, a marina walkway, and a series of parks and trails since purchasing 1,000-plus acres in Union Bay more than 10 years ago.

The plan includes a freshwater treatment plant for water coming out of Langley Lake. McMahon figures the company needs about six or seven months to secure upgrades to the water system before it can apply for subdivision and building permits.

The company also plans to donate land for the construction of a new firehall and possibly a school.

"They (KIP) want the best for the community that is involved where they are located," UBID chair Alan de Jersey said.

McMahon said the agreement is the first of multiple phases of water treatment, the first of which involves a new UV facility and filtration system at the McLeod Road reservoir, which will serve "about 500 doors" in addition to about 650 existing Union Bay residents.

Later plans include upgrades to water lines and roads.

"We have been working with (UBID) over the past years so that we can have certainty," McMahon said, noting stipulations of a master development agreement between the regional district and Kensington. "We needed certainty of water before we could start moving forward."

UBID trustees Cleve Goldswain and Bruce Livesey — both members of the Taxpayers for Accountable Governance (TAG) group in Union Bay — opposed the agreement.

The UBID suggests there was "third-party involvement" in reviewing the confidential document, which Goldswain and Livesey denied. According to the UBID, reports submitted by the two trustees were authored by a third party, those being TAG members Carol and Dave Molstad.

After de Jersey asked for Goldswain's and Livesey's resignation, which they refused to do, the UBID board resolved to "investigate and take further action."

Livesey remained silent during the news conference. Goldswain did not attend.

The board notes that Carol Molstad has forwarded her name as a nominee for trustee, to be decided at the UBID AGM on Saturday.
In a news release, Molstad and fellow TAG member Anne Alcock, also a trustee candidate, said KIP "offers an opportunity for us to develop our potential and bring much-needed improvements to Union Bay.
"While we would have preferred a more open process, we congratulate the entire board on achieving this agreement."


The document is available at www.union-bay.ca. 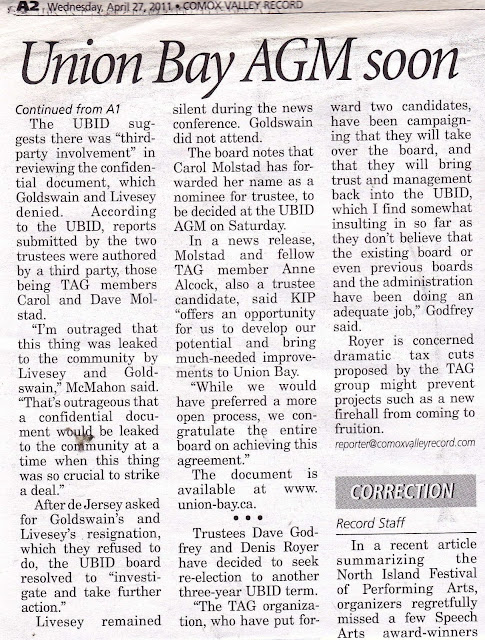 The following report was published temporarily on the UBID website last year.

Background:
34083 Yukon Inc. (Kensington Island Properties) has proposed a development for Union Bay which follows a comprehensive development plan.  This development will encompass the development of approximately 600 hectares of lands within the Union Bay Improvement District and provide the community with a golf course and related facilities, a marina, walkway along the waterfront, a boutique waterfront and various residential and commercial options.  The project is estimated to add an additional 3,354 doors to the existing 650 doors currently serviced by the UBID.  During the zoning process a Master Development Agreement was agreed to by the Developer and the Comox Valley Regional District.  In this agreement the developer agreed to enter into an agreement with UBID to provide water service to the development which may include upgrading the existing service to meet legislated or required standards by Vancouver Island Health Authority (VIHA), UBID or other regulating bodies.UBID had been advised by VIHA that no new subdivisions could be added to the UBID system until water treatment, as mandated, to meet 4-3-2-1-0 was installed and operational.

Process
Brian McMahon and his legal representation, and Trustee Royer and UBID legal representation met several times to negotiate the terms of the agreement.A draft copy was presented at an ‘in-camera’ meeting on March 21, 2011 for the Trustees review.  Trustee Goldswain was absent for that meeting.  There were some areas of concern which were referred back to legal counsel and the developer for review and further negotiation.  Copy of the agreement was provided to Trustee Livesey which he reviewed with Trustee Goldswain.  A revised draft agreement was brought for Trustee review in an ‘in-camera’ session on April 8, 2011.  The agreement was reviewed line by line and Trustee Goldswain and Livesey provided a report with their concerns.  The report was reviewed line by line and answers provided.  It was noted that on the draft agreement there were some minor corrections and clarification on the utilities that required further attention. It was clarified that utilities involved with the water treatment plant would be borne by UBID as the developer was receiving no revenue from providing the water treatment for UBID use.  Trustee Goldswain and Livesey submitted further concerns which Trustee Royer reviewed with the Administrator.  Legal council was then advised to prepare a final draft for signatures of the developer and UBID.

Staff Comments:
The agreement is designed to meet the immediate water treatment requirements imposed on UBID to be met by 2015.
Proposed development of the Lands will be a phased approach where UBID will have the opportunity of assessing the additional requirements of supplying water to the development and negotiate the required amenities.
The agreement is designed to allow UBID to add 10 additional connections per year to the temporary Phase 1 works.  This meets the current base established for budget purposes.  It is noted that UBID has not had ten connections added in one year for the last ten years.  The number of units not used would be accumulative.
The agreement provides for water infrastructure treatment.  A separate application process by the developer is required for subdivision approval and the provision of water for each phase of the development.
It is noted that the reports provided by Trustee Goldswain and Livesey were authored by a third party.  Clarification is requested regarding this matter.